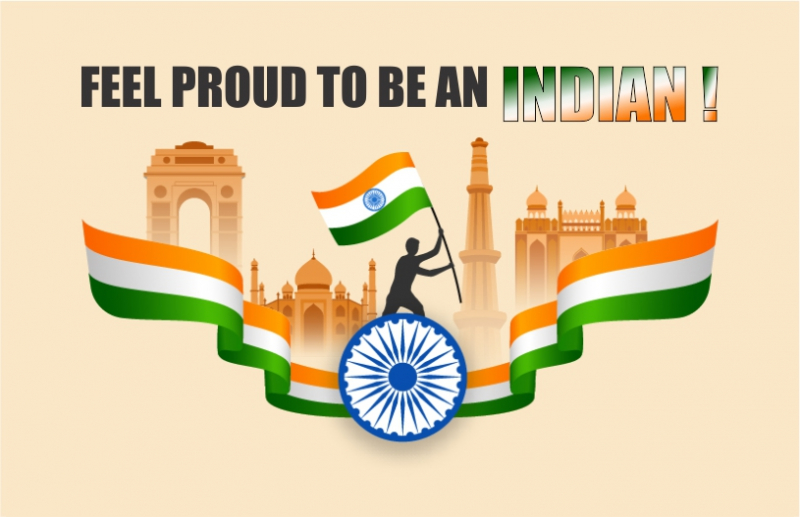 Feel Proud To Be An Indian!

On 15th August 2021, we all will be celebrating our 75th Independence day. We got independence in 1947 and since then we celebrate this day with great joy. Everybody celebrates it in their own ways. But, most people fly kites considering it as a symbol of their freedom. We Indians were enslaved earlier by Mughals then By British people for more than 200 years, which was a huge time. People of those times had faced so many miseries that we can’t even imagine, how they must have felt? Whatnot they had suffered in their slaveries.

Then people like Chhatrapati Shivaji Maharaj, Jhansi ki rani, followed by Bhagat Singh, Raj Guru, Subhash Chandra Bose, Sukhdev, Mahatma Gandhi, and many more freedom fighters gave their blood, sweat, and lives in the struggle for freedom. It was not at all an easy battle to fight against so many Britishers who were so overpowering. At that time there were many hurdles coming in the freedom fight. Such as, people were so used to enslaving others that they never thought of a free India. Hence the first hurdle was to make them realize that it’s high time to rebel. Then people were united in different groups so that planning can be done and executed for the freedom fighting moment. Another hurdle was a lack of resources. British people were well equipped with bombs, riffles, Army, and money. On the contrary, we Indians are short of everything, such as Manpower, Riffles, Knowledge, and most importantly financially weak.

But, As it is said, “When there is a will there's a way !”.Despite having so many odds we Indians fought. And the sacrifice of all the freedom fighters paid off when we finally got Independence on 15th August 1946. We all should never forget their sacrifices and make full of the lives we got because of them.

Like-wise glaze company is the Best Direct selling company that believes in “Unity is Strength” also promotes MLM Business, allowing people to use their skills by first training them & then helping them to start up a new business. It also supports network marketing. Network marketing is such a business modal that it will be most preferred in the future. It comes with many benefits, such as it involves lesser risk, it Doesn’t require special skills or Higher education, it helps in Personal Growth as well.

Like-wise Galway is a Brand name of Glaze trading company, that believes in the true power of “India”. All the Galway products are made on the principle of “Made in India”. They are made with very exclusive Herbs that are very beneficial as well. GalwayKart gives you the widest range of products under divergent categories, such as Personal care & Beauty, Health & Wellness, Agriculture, and Home & Kitchen. Each category has different names based on its products, such as ‘Galway Rupabham’ has all the personal care & Beauty products, ‘Galway Srigunam’ is a Male Grooming Range offerings things like Face cream, Shaving Cream, After Shave, Etc.