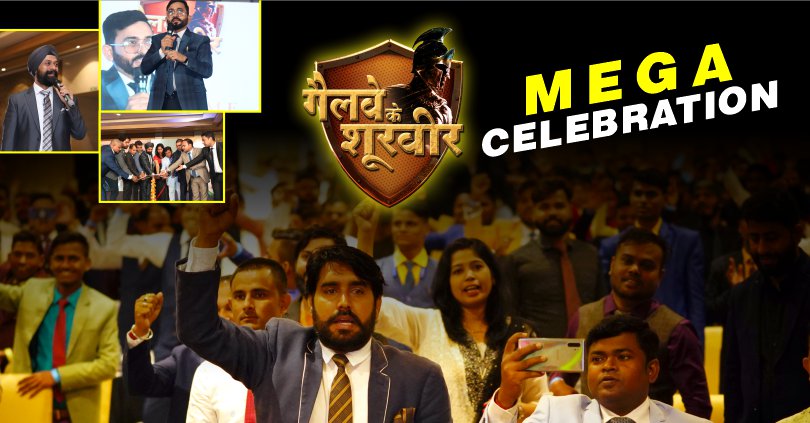 The grand celebration of ‘Galway ke Shoorveer’ Achievers Day at the five-star Hotel Radisson Blu in Delhi added to the history of Galway business many proud moments that will be heard for years to come as Glaze's success stories. Illuminated with the zeal of success and the zeal to win, hundreds of Galwians from across the country, by qualifying the Delhi Trip Offer, not only won the title of achievers, but also won certificates and honors by winning certificates and honors in the presence of Galwians from across the country. Whether it is the knights of Uttar Pradesh, Bihar and Jharkhand or the Soorma of the South. Be it the warrior of Delhi, Punjab and Haryana or the brave of Rajasthan. Be it the great hero of Orissa or master of Gujarat.

The five-star hotel of Delhi, which witnessed this memorable event, was seen illuminated by the vivacity of Galwians. The enormity of the program could be gauged from the lofty echo of Go-Galway, Go-Galway by the achievers present at Shoorveer event. Let see the happy memories of this unique grand ceremony of its kind and joy of success. Hope every member of the Glaze family joins us in this wonderful journey.

The historical tableau of the states started with

Although the main purpose of organizing this spectacular event was to honor the Shoorveer of Galwians i.e. Delhi Trip Offer Achievers, but this program got more effective when all the Galway Achievers and their team members performed the historic tableau i.e. Pride March. During this Pride March, Galwians team from different states presented a lofty view of their winning spirits by performing State Flag March.

For the first time in Glaze's history, the Galway Shoorveer Pride march made every Galwian proud of their identity. The Pride March saw a living example of Glaze's Unity in Diversity and the emerging power of Women's Empowerment.

After this scintillating start to Galway's Shoorveer programme, it was time to light the lamp. The company's Director Mr. Sarabjeet Singh Arneja, Senior General Manager Mr. Kush Kumar along with syndicate members from all over the country and several senior Galwians were invited on the stage for this auspicious beginning, who were greeted with thunderous applause. The ceremonial opening of the event with the lighting of the lamp and Ganesh Vandana was followed by the video launch of the magnificent logo of 'Galway Ke Shoorveer' on a huge digital screen. Seeing this splendid logo, the enthusiasm of every Galwian doubled and the intentions became lofty.

However, now it was the turn of the segment, for which Galwians from all over the country had come to Delhi. Yes, there was an opportunity to honor the achievers of Delhi Offer Trip on stage. Mr. Sarabjeet Singh Arneja, Mr. Kush Kumar, Janardan Prasad and Rajesh Paswan were called to make this special segment memorable. About 150 Achievers Galwians from different states were honored with splendid and attractive certificates in the hands of these dignitaries. During the certificate distribution, many selected achievers, through their inspiring sharing, not only motivated all the Galwians present in the program but also proved that everyone gets a chance to succeed in the Galway business and every person in this business can make their dreams come true. could. Leaders like Janardan Tanti, Mahesh Kumar, Jayanti, Kiran Mudgil etc. were prominent among those who shared.

Not only this, to add excitement and enthusiasm to the program, the achievers and team members of all the states won the hearts of everyone by performing group dance on the stage.

The event featured many such activities that were happening for the first time in Glaze's Achievers event history. For example, in this program Galwians got the gift of not one but four talk shows. Now you must be wondering what was it like in these talk shows, then let us tell you that where Mr. Sarabjeet Singh Arneja was the host of these talk shows, the guest was none other than Mr. Chetan Handa, the founder-director of the company. These four talk shows were screened in different parts, in which Galwains were told the success mantras for success in Galway business and business training modules through interesting question and answer sessions.

Intermittently during these talk shows, Mr. Sarabjeet Singh Arneja, by asking questions related to all the Galwians, rewarded the team with the correct answer.

During these talk shows, Mr. Sarabjeet Singh Arneja also rewarded the winning team by asking questions related to Talk show. Thus, the first day of the program was completed with great enthusiasm and zeal and on hearing the celebrities who were present to launch the program on the second day, one could clearly see the wave of immense happiness on the face of every distributor. In fact, at the very beginning of the second day, Mr. Sanjeev Chhibber, the founder-director of the company, represent the picture of the company's golden future to all the distributors through a video call, and took a co-resolve to make Glaze the number one company in the world.

Thus, the grand celebration of the two day Achievers Program 'Galway Ke Shoorveer' filled everyone's face with smiles and new goals and hopes. Also concluded with determination to touch new heights of success with joy, respect, fun and excitement and the pride of being associated with Galway business was clearly visible on every distributor's face as they bid goodbye.